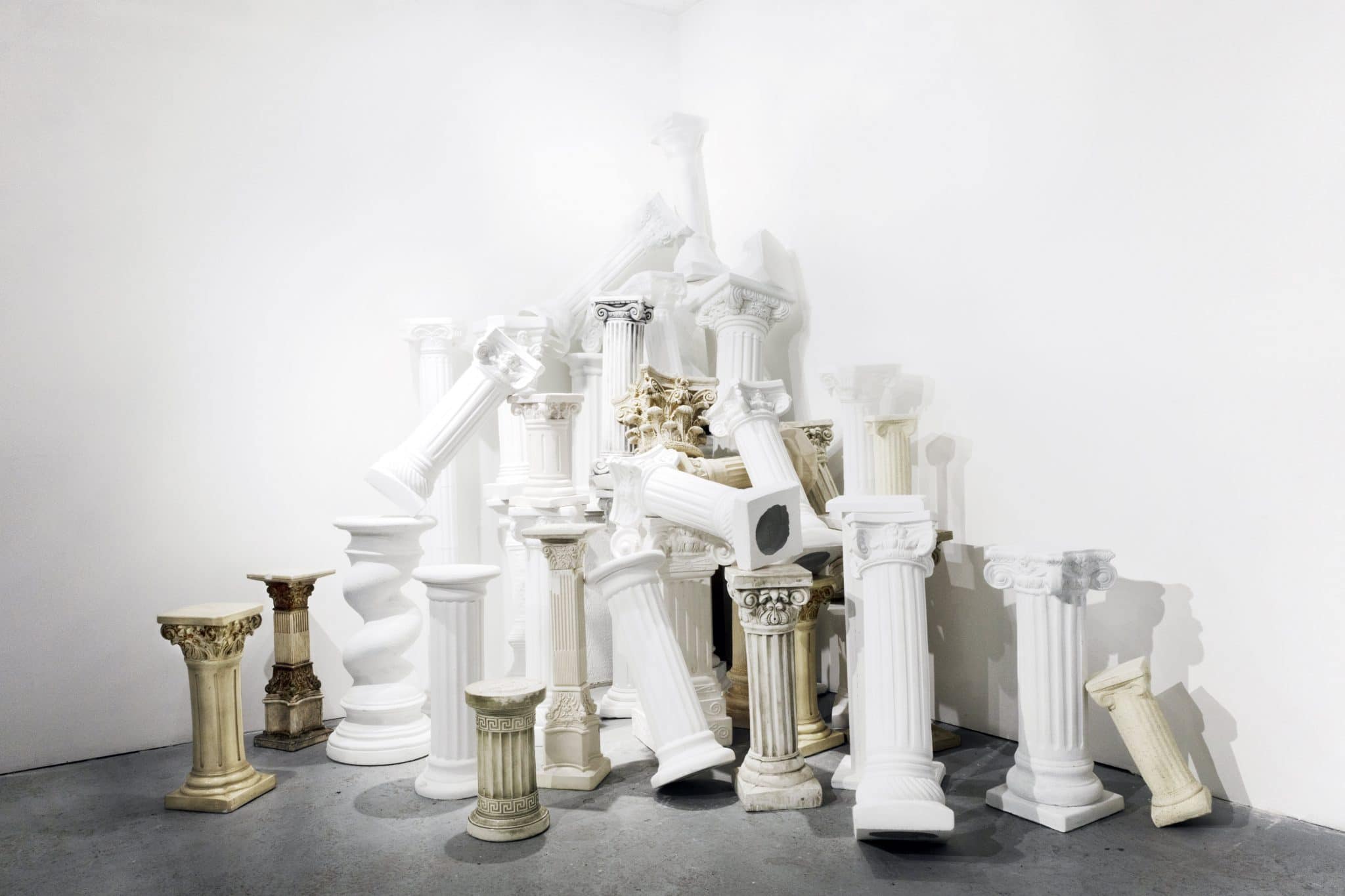 Artful Dodger: A Review of Kelly Kristin Jones at 062

“We Forgot the Moon Holding the Sun” by Kelly Kristin Jones is an exhibition composed of a series of carefully staged photographs alongside a sculptural installation titled “Orders of Empire”. Jones’ black-and-white photographs in the ongoing series, “Untitled,” take on a painterly quality from the harshness of 062’s white walls. The images evoke the artist’s self-proclaimed mission to identify and conceal iconographic sculptures or “personal memorials” in suburban Chicago neighborhoods. Under a veil of darkness, Jones began photographing memorials found at night, disrupting the landscape masters’ accounts experienced by day. With a practice centered on reimagining public landscapes, “separating” or concealing public monuments has been a way for Jones to “heal communities,” both literally and numerically. What is striking about this particular series is the apparent tranquility on the surface of each Piso print. Deep, saturated shades of black are etched with reflections of light as the artist undertakes the exercise of digital and physical masking of monuments in a way that makes it nearly impossible to comprehend the scale and depth of each. antiquity. What is presented instead are subtly lit edges, gestures that are drawn against an entirely familiar Midwestern landscape, where Jones confronts private and public vulnerability through constructed photography.

As the new mother, Jones created “Untitled” primarily by walking through her newly adopted neighborhood of Oak Park at night. She became intrigued by the neoclassical garden and patio sculptures in other women’s backyards, perceiving them as signifiers of class and cultural identity. Testing the limits of public and private access, Jones would “encroach” on these spaces to examine, measure and photograph personal monuments. Returning the image to the studio, Jones then transfers the images to Photoshop, avoiding landmarks found with the software’s “healing” tool, then expanding the landscapes to digitally conceal these monumental shapes. Printing the manipulated image, Jones returns to the site once more, staging a physical masking of these personal monuments with the intention of “fixing” the landscape. The result is a series of apparently abstract landscapes, where the viewer can barely perceive the elementary, now discontinuous form of his landscape.

Presented as a linear series of images, “Untitled” juxtaposes America’s political history with Jones’ autobiographical study of material time and space, combining nesting conditions as a new mother with depiction. history of the class in the American suburbs. Uniquely occupying the interstitial space that sits discreetly between the role of woman day and night, she masterfully reconstructs the two-dimensional and three-dimensional nature of our constructed world, distorting the intimate registers associated with our inner and outer worlds. By explicitly presenting each photograph in an equidistant line, the series reads more as a polyptych than as individual pieces, making it all the more difficult to consider given this country’s continuum and traumatic history.

Jones’ previous projects, “Poems for my mothers” and “Coverings,” have taken on public monuments, questioning how photography can provide a countermemory by supplanting or replacing white supremacist images in public spaces. In “We forgot the moon by supporting the sun”, we witness a return to oneself, a kind of more personal calculation, which imposed itself on the artist at a time when public spaces were devoid of public and where the private has returned to being a sanctuary.

It is a known and accepted fact that many young couples tend to settle in peri-urban areas around their first childbirth. Linked to the cost of housing, maternity costs and access to space, moving from a city to a suburb is often accompanied by an increase in travel times, a search for a new sense of community and the need for the mother to renegotiate her role in participation in the labor market. In this specific series, Jones doesn’t just deal with white supremacy and patriarchal systems. Jones’ body of work underscores the intricate and interwoven nature of building a family against the backdrop of the relentless pursuit of freedom. Raising a family, relocating, and pursuing active story telling, Jones draws on collective and individual experiences that speak to the trauma of womanhood. In creating these abstract juxtapositions, the seemingly random images overturn the visual hierarchy associated with photography, while her sculptural installation does much the same. In “Orders of Empire” Jones employs the language of neoclassical architecture (classically associated with male “genius”), carefully presenting a set of columns collected by the artist during the pandemic. From real estate sales and online markets, each symbolizes an interaction between the artist and a woman negotiating her identity in relation to the idea of ​​America. For the purposes of this exhibition, the in situ installation at 062 can be seen as a critical study of the unfavorable structural conditions that dictate the attribution of power over maternal labor, overturning a dominant male narrative of white supremacy in a confrontation dialectic between multiple forms and supports.

While Jones’ photographs lead us to question the mnemonic experience of historic landscapes, the images highlight the tension between figuration and abstraction and serve as a constant reminder of the conflict between the referent and nature. Unveiling the banality of personal and family histories and the ubiquitous conception of nationalism, Jones’ works seek to disrupt the landscape by speaking to those who are silenced, invisible or neglected, much like a mother caring for her child, while the busy men of the world rest at rest. (Pia Singh)