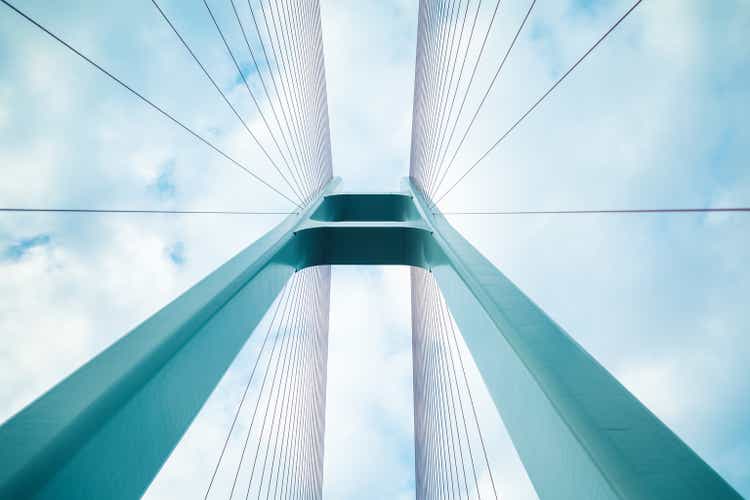 Infrastructure’s strong outperformance versus global equities comes amid rising rates, shrinking balance sheets, limited fiscal response at this stage of the cycle and, at the same time, elevated geopolitical risk and potential downturn of global growth. In this volatile environment, the characteristic stability of infrastructure – resilient cash flows, strong dividends growing well above inflation as well as the pass-through of inflation – came to the fore.

On a regional basis, the United States and Canada were the main contributors to quarterly performance. US energy infrastructure company Cheniere (LNG) and Canadian energy infrastructure company Pembina Pipeline (PBA) were the best performers. Cheniere Energy, which owns and operates liquefied natural gas (LNG) export facilities in the United States, has benefited from tensions in Europe which have increased demand for American LNG. Pembina Pipeline, which provides transportation and midstream services to the energy industry in North America, also grew on increased demand for LNG. The hiring of Scott Burrows as permanent CEO and Jaret Sprott as COO and the reaffirmation of his corporate strategy also boosted investor sentiment.

US electric utility Exelon (EXC) was also a major contributor. Exelon is a pure, regulated transmission and distribution utility company serving millions of electric and gas customers in Delaware, Illinois, Maryland, New Jersey, Pennsylvania and the District of Columbia. Equities outperformed along with the utilities sector; Exelon is also starting to be seen as a name of choice after its recent spin-off from the power generation business Constellation Energy (CEG).

In Western Europe, French rail operator Getlink (OTC:GRPTF) also performed well during the quarter. Getlink holds the concession for the Channel Tunnel rail link between the UK and France. Shares rose as traffic continued to recover with the easing of pandemic-related restrictions and, separately, Getlink’s power transmission interconnection project, Eleclink, received final safety certification from the regulator, allowing start of operations in mid-2022.

Rising interest rates and inflation made markets volatile after the outbreak of the conflict between Ukraine and Russia. We expect this volatility to continue as the market digests the impact of the war on inflation and global growth. Geopolitical risks, continued COVID-19 disruption, supply chain issues and high inflation continue to dampen economic growth expectations, although a recession is still not our base case scenario.

Rather, our baseline scenario is one of slowing growth and rising inflation in 2022; Given this and current valuation signals, we continue to shift the portfolio towards less economically sensitive utility assets. In an environment of rising inflation and rising interest rates, utilities tend to be shorter in duration: their assets and returns are reviewed at frequent regulatory resets, making them relatively less sensitive to fluctuations medium-term bond yields. While inflation causes volatility in stock markets, over the medium term inflation will have little effect on infrastructure assets, which act as a hedge against inflation due to the largely pre-programmed way – through regulation and contracts – which they can adapt to inflationary environments.

We believe that an inflation-linked absolute return benchmark is the most appropriate primary metric to assess the long-term performance of our infrastructure strategies. The approach ensures that portfolio construction remains focused on delivering consistent absolute real returns over the long term.

On an absolute basis, the Strategy generated positive contributions from six of the nine sectors in which it was invested (out of a total of 11) in the first quarter, the energy infrastructure, electricity, rail and gas sectors. being the major contributors and communications, toll roads and the renewable energy sectors the detractors.

During the quarter, we initiated positions in US gas company Sempra Energy and US power companies PG&E Corporation (PCG) and received shares in Constellation Energy following its spin-off from Exelon. We sold French airport operator Aeroports de Paris (OTCPK:AEOXF), US electric utility Southern Company (SO) and US renewable energy utility Brookfield Renewable (BEP).

Editor’s note: The summary bullet points for this article were chosen by the Seeking Alpha editors.