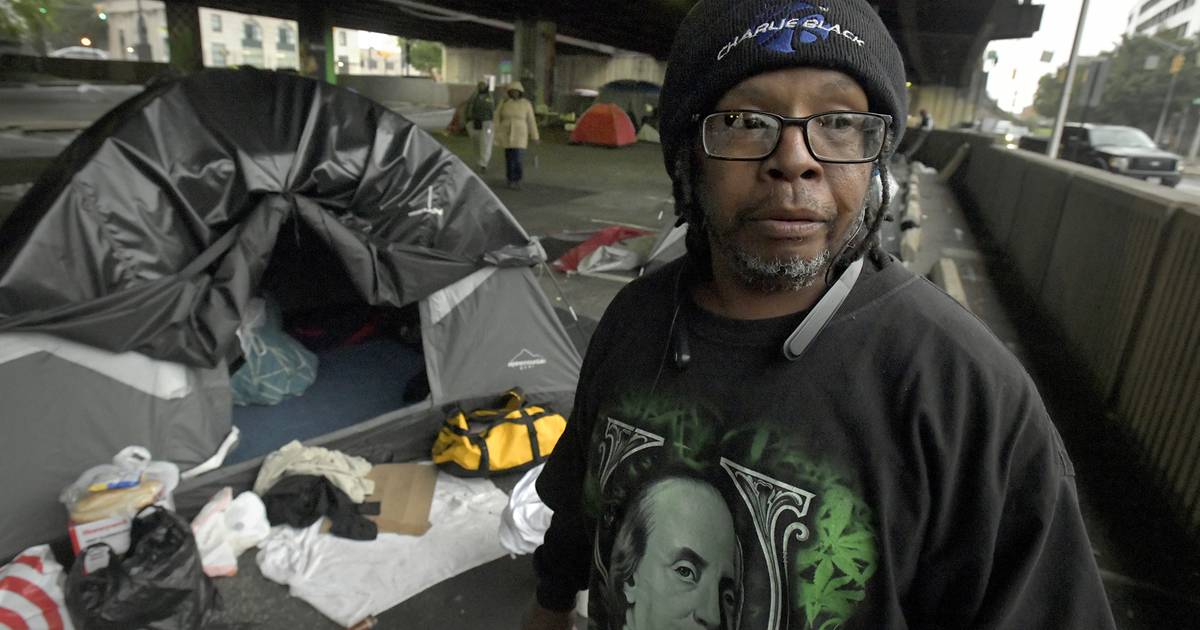 People living in a homeless encampment at the Baltimore Farmer’s Market site agreed to make space for Sunday’s event after talks Friday morning between the city and advocates.

“[B]Both parties have agreed that people who started setting up tents at the site last Sunday would vacate the site (Saturday) afternoon with the intention of allowing sufficient time to prepare for the Sunday Farmer’s Market,” he said. said Monica M. Lewis, spokeswoman for the mayor’s office.

About two dozen homeless people, who have camped under the Interstate 83 overpass at Saratoga and North Gay streets, will move across the street to a vacant private parking lot, attorney Christina Flowers said. founder of the Belvedere Real Care Providers Network.

“That’s what we’re willing to do to show unity in the whole process, because basically it’s the safest place to operate outside of shelters,” Flowers said Friday morning.

A group of activists and homeless people protested the city’s plans to remove their encampment Thursday afternoon when they erected barricades on Saratoga Street at North Gay Street and blocked traffic. They placed lawn chairs on the road next to a red tent with a sign that read: “Accommodation!! Nothing else!!!”

The protest was sparked by a notice posted on Thursday saying the area was to be cleared on Friday.

Flowers said she and the people at the camp were preparing breakfast when Baltimore City Department of Public Works officials and a garbage truck showed up around 7 a.m. Friday.

“They came with the expectations as our city always does, [which is] it’s a homeless camp, [there’s] trash, it’s dirty, it’s junky,” she said. “No. There is no trash here. Everything here is someone’s living space.

Flowers and a handful of people at the encampment negotiated with the city, she said. On Friday afternoons, Flowers was still at camp serving Dunkin’ to everyone.

“I do this every day because of my support system,” she said. “People who reach out will [into] their own pockets and make sure we have water, food.

Flowers was one of the organizers of Thursday’s protest. Flowers also helped organize an equally visible protest in August, when protesters set up red tents on the lawn in front of City Hall. She said the activists had a bail fund and were ready for arrest on Friday.

Flowers said she believes the city has an obligation to help these people.

Activists and residents of the encampment have said they want permanent accommodation.

“I’m not talking about shelter,” said Ashford Davis, 37, a community activist who lives under the overpass. “I’m talking about housing.

The tent camp overlapped last weekend with the popular farmers market. Some vendors arrived early Sunday morning to find tents in the places they rent to sell produce, prepared meals and other goods.

Pierson Geyer, general manager of Agriberry, a Virginia-based berry farm, said when he arrived at the market at 6:20 a.m. there was a marked off area with tents where he normally sets up his stall.

The morning was cold and wet, so “at first I thought it was an emergency response to a hurricane,” Geyer said.

The market manager found another location for Agriberry, and the berry stand ended up having a “really good day of sales, all things considered,” Geyer said.

The market was less busy than usual due to the rain, and some vendors failed to show up, leaving plenty of space to move affected vendors.

Geyer said he felt compassion for the market’s homeless neighbors, but hoped city officials could find a solution that wouldn’t interfere with vendor stalls.

The Baltimore Farmers’ Market is “an important market” for Agriberry, he said. The farm spends Thursday through Saturday harvesting fruit for the market, hiring extra staff on Saturdays just to have enough berries to sell in Baltimore, which is a 2 1/2 to 3 hour drive from the Hanover farm. , Virginia.

Barbara Hauck, spokeswoman for the Baltimore Office of Promotion & the Arts, which organizes the Sunday market, referred questions about the encampment to Mayor Brandon Scott’s office and the Mayor’s Office of Homeless Services.

Lewis, the mayor’s spokesman, said Thursday that his office was aware of the tent camp and that the mayor’s office of homeless services had spoken with the group.

“They weren’t in communication with us prior to their protest, nor did we give them permission to be there as BOPA worked to license vendors to sell their items there,” wrote Lewis in an email.

She said camp coordinators agreed to move on Thursday and her office was working to ensure the space was ready for market vendors to set up shop on Sunday.

“As we normally do, representatives from MOHS are working to connect some homeless people with housing and support staff to help them find more permanent housing,” Lewis wrote. “Shelter and storage accommodations were offered to those in need.”

Alonzo Coley, 33, said he pitched his green tent under the overpass after recent cold weather made it impossible to sleep in his truck. Although Coley has been offered housing, he wants a permanent housing option that will allow him to stay with his 3-year-old son, who lives with his mother in Silver Spring.

Some living under the overpass said the location was ideal because it is close to service providers, has access to electricity and is sheltered from the weather. They say the city’s temporary housing options are inadequate or unsafe.

Ayla Reeves, 19, has been staying under I-83 for two weeks. Reeves said she tried to stay at shelters in Baltimore, but found them dirty and the staff did not treat residents with dignity.

“Shelters are crazy. They don’t clean them properly and they were watching us,” she said.

Reeves also expressed concern about bedbugs and living with drug addicts in shelters.

Get the latest news as it happens and find out about other must-see content with our free news alerts.

Not all homelessness advocates agree with the protesters’ tactics, said Anthony Williams, vice chairman of the Baltimore City Care Continuum Board.

“We don’t want homeless people to be put at risk and it’s very important that their voices are heard first,” Williams said.

He grew up in Baltimore’s foster care system and was homeless several times in his life. He said the city’s shelter system needs work, but the mayor’s office is moving in the right direction. It takes time to spend the federal money Baltimore has set aside for housing, including funds to purchase hotels for emergency shelters, he said. All you wanted to know