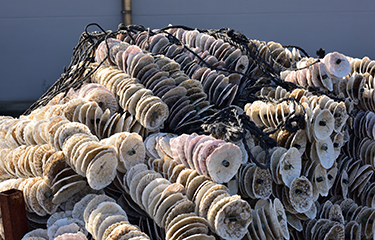 The Japanese Fisheries Agency (JFA) has added policies for aquaculture products other than fish – mainly shellfish and seaweed – to its aquaculture strategy. The new policies aim to exploit potential aquaculture sites more fully and to take into account the new rules on who can manage aquaculture sites.

Following a major reform of Japan’s fisheries law in 2018, private companies will be able to obtain access rights to aquaculture areas that were preferentially reserved for fishing cooperatives. The document, titled â€œReview of the Global Strategy for the Industrialization of Aquaculture Growthâ€, was released at the end of July.

In the â€œFisheries Policy Reformâ€ announced on June 1, 2018, the national government began formulating a comprehensive strategy for the growth of the non-fish aquaculture sector from production to sale and export. . He formed the Aquaculture Growth Industrialization Promotion Council, made up of business groups, NGOs and academic experts, to decide on the best methods to develop the sector. The board decided on a strategy of moving from a production orientation to a market orientation in order to better respond to market demands. The council then compiled the results of its shared vision as a comprehensive strategy for the growth and industrialization of the agricultural industry.

The overall strategy notes the main trends in the aquaculture industry:

JFA said it plans to create separate strategies for domestic and export markets and will try to better link production stages to maximize added value. As fishing cooperatives no longer have exclusive rights to aquaculture sites, the agency is considering five types of aquaculture management bodies that are possible within the framework of the reforms: the collaboration of producers, or the cooperation between several relatively small farmers; Collaboration with producers – or co-operation of farmers and fishing cooperatives and feed suppliers, processors and distributors in production areas; Producer-type businesses, which can grow through acquisitions; Integrated businesses, or the management of all or part of the agricultural value chain by a single company; And distribution type companies, whose main activity is distribution and sale, with the participation of farmers.

JFA said it will prioritize the collaboration of small-scale producers in the short term as it seeks to establish a management infrastructure for non-fish aquaculture in Japan.

In addition, as part of JFA’s new strategy, scallops and pearls have been added to the list of priority export items. The Japanese farmed scallop industry is centered on Mutsu Bay in Aomori Prefecture, where scallops are grown suspended from vertical ropes with the â€œover-the-earsâ€ method. Cultured pearls were developed by the Mikimoto Pearl Co. based in Toba, Mie Prefecture. He remains the first producer.

Strategies to meet market needs include the introduction of the HACCP quality control method and the substitution of farmed fish for natural fish in the domestic market based on its predictable supply and size and quality. product constants.

The Japan Food Overseas Promotion Center (JFOODO) was established to promote Japanese foods to overseas consumers. In addition to promoting amberjack and red sea bream in Hong Kong and Taiwan markets, it is working to increase demand for yellowtail flounder in the United States.

Another organization, the Fisheries and Processed Fisheries Export Expansion Council, focuses on organizing business meetings between local buyers and Japanese companies, and organizing seminars on Japanese seafood. He mainly focused on the European Union and South East Asia.