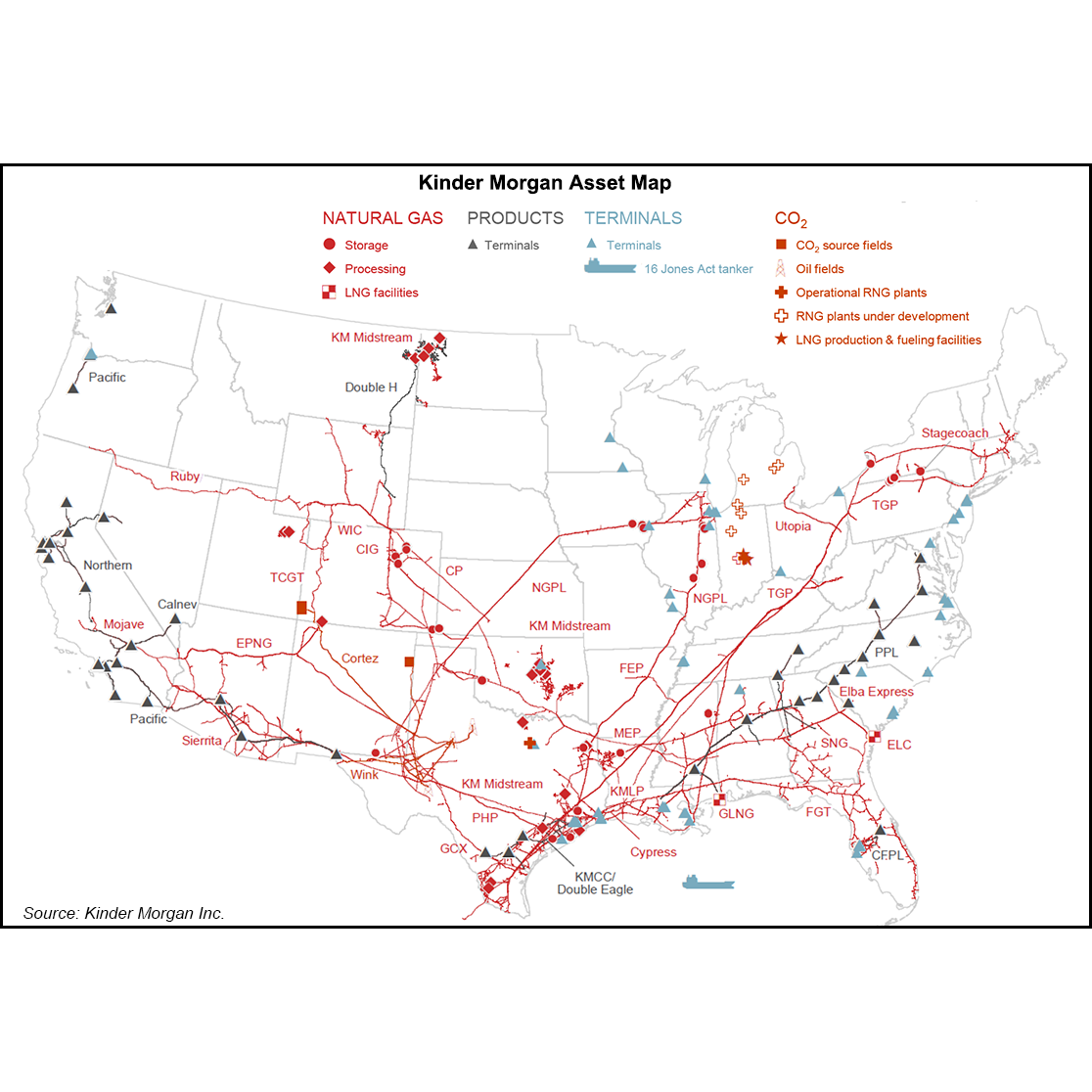 Kinder Morgan Inc. expects substantial growth in U.S. natural gas exports, including to Mexico via pipeline and the global market via LNG, over the next several years.

KMI is currently under contract to export about 4 billion cubic feet per day to Mexico, management said. KMI’s pipelines serving the Mexican natural gas market include the 640 100 cfd Mier-Monterrey system in Mexico, the 2.1 10 cfd Permian Highway pipeline linking supply from western Texas at the Agua Dulce hub, and the El Paso natural gas system serving six US states along with northern Mexico.

“Given the situation in Europe today, which will translate into longer-term contracts and continued use in Asia, this hyper-growth scenario actually seems pretty reasonable to me,” Kinder told analysts during a call to discuss third quarter results. “That’s a huge increase, and most of it will be in Texas and Louisiana, where a lot of our asset base is.”

He cited that KMI currently transports about 50% of the gas consumed by U.S. liquefied natural gas export terminals, and “we expect to maintain or expand that share in the future.”

KMI is undertaking several projects to meet growing natural gas export demand, including the expansion of the Permian Highway Pipeline LLC (PHP) system and the Evangeline Pass project in Louisiana and Mississippi.

Kinder added that “we plan to announce additional projects in the coming months. When you add the growing need for natural gas for industrial uses, power generation and exports to Mexico to this massive demand for LNG, the result is a huge opportunity to develop our system in a way that is efficient in terms of capital.

“As we all know, it has become increasingly difficult to build new pipeline projects, especially in the Northeast and other areas outside of the U.S. Gulf Coast,” said Kinder. “While this situation is, in my view, unfortunate and poor public policy, it makes existing infrastructure even more valuable.”

He added that “Having such an extensive network already in place provides a great opportunity for a company like ours to scale and expand our assets incrementally without the herculean task of licensing and building a completely new project”.

He explained that “These exit projects can provide excellent service to our customers and generate a very good return for our shareholders. At KMI, we are fortunate that much of our network is in Texas and Louisiana – states that understand and appreciate the need for new energy infrastructure and where much of the demand for additional throughput is located, especially natural gas.

KMI is targeting a November 1, 2023 in-service date for the capacity expansion of around 550 MMcf/d of PHP, which would supply more natural gas from the Permian Basin to Gulf Coast markets.

The Evangeline Pass project is designed to add up to 2 million TND/d of natural gas capacity to the Tennessee Gas Pipeline LLC (TGP) and Southern Natural Gas (SNG) networks in Louisiana and Mississippi.

Meanwhile, for KMI’s proposed Cumberland Pipeline project, construction is expected to begin in August 2024 with an expected in-service date of September 2025, pending approval of required permits and clearances. The project is a 32 mile, 30 inch diameter lateral separation from TGP that would provide approximately Dth 245,000/d of additional gas supply to a proposed 1,450 MW natural gas fired power plant in Cumberland, TN.

“Our Natural Gas Pipelines segment continues to see strong demand for the extensive firm transportation and storage services we offer, as well as favorable contract renewals across several assets across our network,” said CEO Steve Kean. “We are also moving forward with plans to provide additional transportation capacity to LNG facilities and remain focused on continuing to be the supplier of choice for this growing market.

“Given the proximity of our existing assets to planned LNG expansions, we expect to maintain and potentially expand our approximately 50% share of transportation capacity to LNG export facilities.”

The growing share of variable-output wind and solar farms in the power sector, meanwhile, has put a premium on natural gas storage capacity, according to Kean.

“Nationally, we are seeing the market strongly value our 700 billion cubic feet (Bcf) of natural gas storage capacity,” he said. “Our customers are increasingly recognizing the role that storage must play in an energy system that requires flexible deliverability, as the contribution of intermittent renewable sources continues to grow in the electricity sector.”

KMI’s US storage assets also contribute to daily and seasonal variability in exports to Mexico, where there is no underground gas storage, management said.

“Gas Pipelines’ financial performance increased in the third quarter of 2022 compared to the third quarter of 2021, primarily due to increased volumes on our KinderHawk gathering system; continued strong demand for transportation and storage services on the Natural Gas Pipeline Company of America, Southern Natural Gas (SNG) and Midcontinent Express Pipeline; higher contributions from our Texas Intrastate system; and great pricing on Altamont’s collection system,” Dang said.

KMI reported stable natural gas transmission volumes compared to the third quarter of 2021. There were declines on the Texas intrastate network, mainly due to the Freeport LNG terminal outage. There was also a partial pipeline outage from El Paso Natural Gas. Colorado Interstate Gas Co. and Cheyenne Plains Gas Pipeline volumes fell due to lower production in the Rockies, management said.

Volumes to Mexico were reduced in the third quarter “due to third-party pipeline capacity being added to the market,” Dang said.

Natural gas gathering volumes, meanwhile, were up 13% year-over-year “with higher volumes primarily on KinderHawk,” which serves the Haynesville shale, the company said.