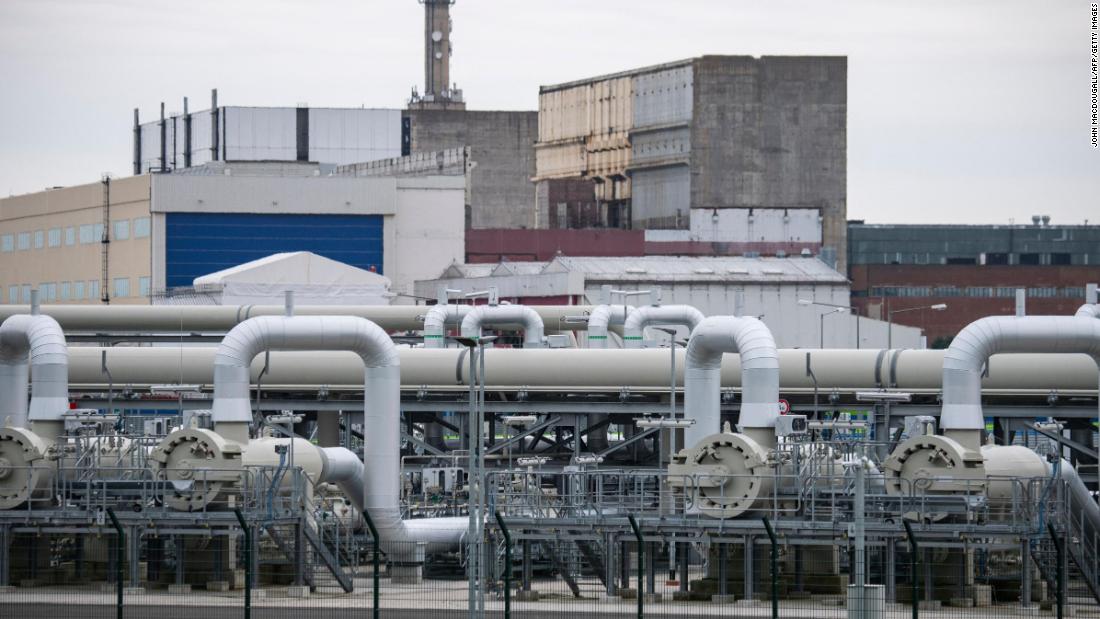 Nord Stream 2 AG: Biden moves forward with sanctions against the company behind the pipeline

“Today, I directed my administration to impose sanctions on Nord Stream 2 AG and its executives. These measures are another element of our first tranche of sanctions in response to Russia’s actions in Ukraine. As I have made it clear, we will not hesitate to take further action if Russia continues to escalate,” Biden wrote in a statement.

“Through his actions, President (Vladimir) Putin has provided the world with an overwhelming incentive to move away from Russian gas and other forms of energy,” Biden wrote.

The move is part of a series of sanctions the United States and its allies imposed on Russia this week in response to Putin’s recognition of breakaway territories in eastern Ukraine as independent.

On Wednesday, signs of an escalation of the crisis emerged, despite the new set of sanctions. Sources including the Latvian prime minister told CNN that Russian troops moved into the eastern region of Ukraine that Russia has now recognized as independent.

“According to the information I have, Putin is moving additional forces and tanks into the occupied territories of Donbass,” Latvian Prime Minister Arturs Krišjānis Kariņš told CNN’s Jim Sciutto on Wednesday. “By definition, it is a crossing from a sovereign territory to a neighboring country.”

The move marks a significant shift in the administration’s policy toward Nord Stream 2, which previously consisted of sanctioning some of the smaller entities involved in the project, including some Russian companies and ships that helped build it, but waiting to sanction Nord Stream 2 AG and its CEO, Matthias Warnig.

President Joe Biden and senior State Department energy official Amos Hochstein, who has been in charge of diplomacy around Nord Stream, had long opposed the project. But there were fears that imposing the harshest penalties would crater US relations with Germany, which insisted the pipeline was just a business project.

But now that Germany, after intensive diplomacy with the United States, has agreed to suspend certification of the pipeline indefinitely, the United States feels freer to allow the sanctions imposed by Congress to go ahead. . Essentially, the administration wanted Germany to decide on its own whether to shut down the pipeline before moving forward with more punitive sanctions on the project, the official explained.

This decision will likely meet with bipartisan support. Democratic and Republican lawmakers have long seen the pipeline as a potential threat to Europe because Russia has used its control over energy supplies to pressure Eastern European countries, including Ukraine. , cutting off these supplies, even during the winter months.

Concern in Congress about the pipeline was acute enough that lawmakers passed legislation with significant bipartisan majorities in 2019 and then expanded it in 2020, demanding sanctions against Nord Stream 2. Last year, the The administration waived the toughest sanctions on Nord Stream 2 AG and its CEOs on national security grounds, prompting Republican Senator Ted Cruz to retain dozens of Biden’s nominees for national security and ambassadorial positions.

National Economic Council Deputy Director Daleep Singh told reporters on Tuesday that the shutdown of Nord Stream 2 “sacrifices what would have been a cash cow for Russia’s coffers” and “will ease Russia’s grip on Europe thanks to its gas supply, and this is a major turning point in the world’s energy independence from Russia.

The waivers were the latest in what should be a steady rhythm of sanctions imposed by the United States for Russia’s actions in Ukraine. The White House said on Wednesday it expected additional sanctions against Russia, suggesting that even if the country took no further action in Ukraine, the United States and its allies would continue to impose costs.

Singh, speaking on CNN, did not specify when. But he pointed to the kinds of sanctions the United States could apply, including export controls “at any time.”

“These costs will increase from here. The two largest banks in the Russian economy have $750 billion in assets under management, which is 10 times more. Our export controls, which can refuse all inflows technologies critical to Russia, have yet to be disclosed. We may disclose them at any time,” he said.

Biden on Tuesday announced what he called the “first tranche” of sanctions against Russia, including restrictions on two state-owned banks, three Russian officials close to Putin and Russia’s sovereign debt. The moves were tough but still left in reserve the toughest measures the US had planned.

Singh said additional sanctions could come even if Russia does not push further into Ukraine.

“The costs continue to rise. The violation of Ukraine’s territorial integrity and sovereignty is unacceptable,” he said.

He described Tuesday’s sanctions as a “demonstration effect” that will “go higher and higher”.

Australia has announced restrictions targeting the transport, energy and telecommunications sectors. Canberra has also imposed travel bans and targeted financial sanctions on eight members of the Security Council of the Russian Federation. Japan also imposed sanctions suspending the issuance of visas and freezing the assets of certain people linked to the recognition of the independence of Donetsk and Lugansk.

On the other hand, China criticized Western sanctions against Russia and said it would not follow.

Biden’s limited sanctions have drawn some criticism from Republican members of Congress. GOP Sen. Ben Sasse of Nebraska said they were “too little, too late.”

Meanwhile, a bipartisan group of House lawmakers sent a letter to Biden on Tuesday demanding he seek congressional approval before deploying US troops to Ukraine, though Biden has firmly ruled out sending troops. Americans in the country.

Ukraine’s foreign minister called the sanctions “specific” and “painful” for Moscow. But he also told CNN’s Jake Tapper that tougher sanctions would be needed to punish Russia for its actions.

“No amount of punishment will be enough until the Russian boots pull out of Ukrainian soil,” Dmytro Kuleba told Tapper on “The Lead.”

Singh, the Biden administration official, said the actions taken by the United States on Tuesday amounted to strong punishment for Russia’s actions and cast skepticism on calls for further sanctions.

“Sometimes I wonder if there is almost a bloodlust for sanctions as an end in itself. But let me be very clear. We hit hard yesterday,” he said, pointing Tuesday’s sanctions package against banks, debt and the oligarchs. , as well as Germany’s announcement of the shutdown of the Nord Stream 2 gas pipeline.

This story was updated with additional developments on Wednesday.