Among the research results presented in the Global Change Outlook 2021 through MIT Joint Program on the Science and Policy of Global Change, published in May 2021, is a study focusing on electric vehicles (EVs) as a partial solution to decarbonize the transport sector.

The Outlook is based on a rigorous and integrated analysis of population and economic growth, technological changes, Nationally Determined Contributions (NDCs) to the Paris Agreement, impacts of Covid-19 and other factors. It presents the latest projections of the Joint Program for the Future of Earth’s Energy, Food, Water and Climate Systems, as well as prospects for achieving the goals. Paris Agreementshort and long term climate goals.

Projections are provided for a Paris Forever baseline scenario, in which the current NDCs (from March 2021) are maintained in perpetuity; a 2 ° C Paris scenario capping global warming at 2 ° C by 2100; and an Accelerated Actions scenario, which limits warming to 1.5 ° C by 2100. More precise scenario definitions are provided in the report, which also introduces a visualization tool which allows higher resolution exploration of each scenario.

Reproduced here in full, the study shows that while the electrification of light vehicles can significantly contribute to the mitigation of greenhouse gas emissions in the transport sector, a more comprehensive approach is needed to complement the job.

EVs offer a solution to decarbonise the transport sector. Private light household vehicles (i.e. cars and light trucks) (LVs) are well suited for electrification due to their smaller size and battery requirements compared to commercial vehicles that transport heavier loads. And as the electricity sector increasingly turns to clean energy sources, electric vehicles will help reduce both GHG emissions and air pollution. Several automakers and local and regional governments have declared ambitious targets for the deployment of electric vehicles over the next 10 to 15 years, but achieving decarbonization of light vehicles on a large scale will be a formidable task.

Our EV deployment projections by large regional groupings (Figure 2) show that growth will be driven by developed regions (driven by Europe and the United States) and other G20 regions (driven by China and the United States). India). We estimate that in 2030, the developed region will have the most electric vehicles (around 60 million vehicles in the Paris Forever and Paris 2 ° C scenarios and around 120 million vehicles in the Accelerated Actions scenario), but by 2050 , electric vehicle markets in developed countries and other G20 regions will be roughly the same size (260-270 million vehicles in Paris Forever, 330-350 million in Paris 2 ° C and 425-465 million in the Accelerated Actions scenarios) because the other countries of the other G20s (Mexico, Brazil, Russia, Korea, Indonesia) should also considerably accelerate their electrification efforts by mid-century.

The electrification of light vehicles will grow rapidly in all scenarios. By the middle of the century, electric vehicles will occupy a significant share of fleets in all regions of the world with significant market growth in China, Europe and the United States. Meanwhile, the need for mobility increases dramatically. Although the electrification of light vehicles can significantly contribute to the mitigation of GHG emissions in the transport sector, it offers only a partial solution. A comprehensive solution will require not only technology, but an integrated systems approach that includes more efficient internal combustion vehicles, a long-term shift to low and zero carbon fuels for transportation, and increased efficiency of the transportation system through digitization, smart pricing and multimodal integration. Further emission reductions could come from more consumers switching from private transport to low-emission public transport, shared mobility, cycling and walking. 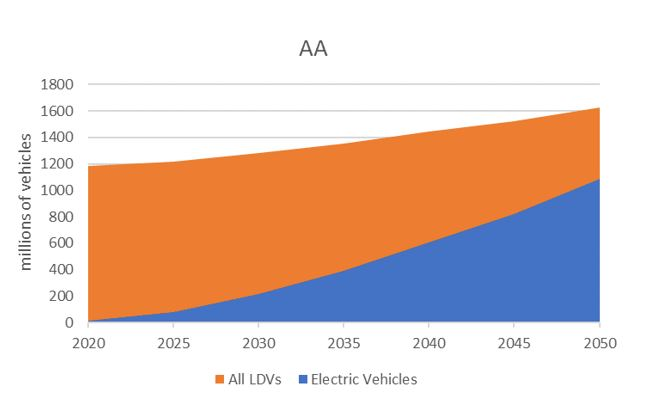 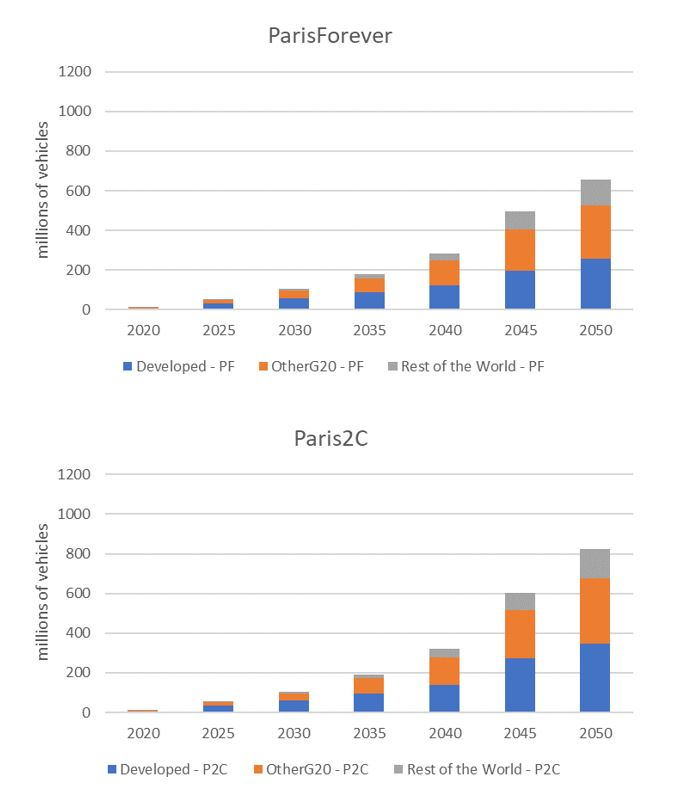 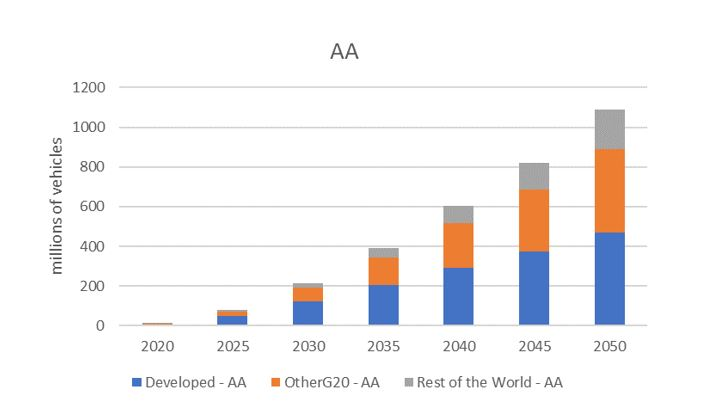 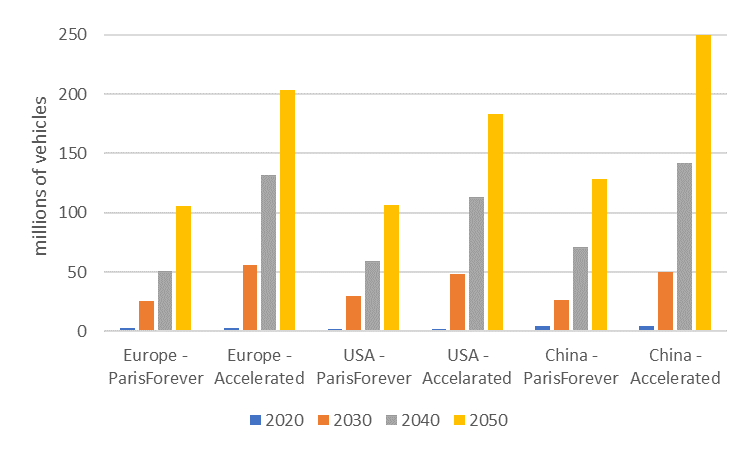 Figure 3. VE deployment in Europe, the United States and China in the Paris Forever and Accelerated Actions scenarios