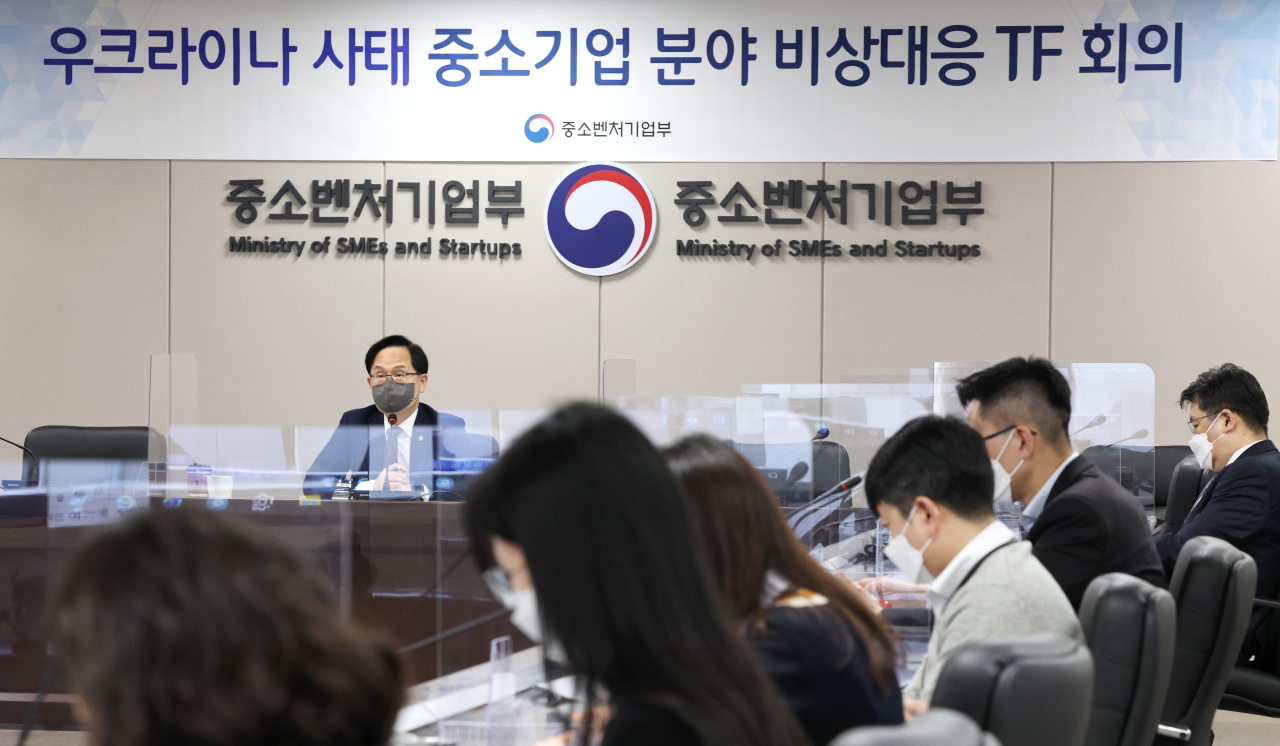 South Korea has decided to end dealings with Russia’s central bank in a bid to join the international movement to impose more sanctions on Moscow, while providing state emergency funds to companies doing business with warring Slavic countries, the government announced on Monday.

Seoul’s announcement follows the recent round of sanctions imposed by the United States and the EU to ban transactions with Russia’s state-run financial institutions. The government will later announce detailed measures after consulting relevant government agencies, according to the Ministry of Economy and Finance.

Companies with 30% or more of their exports going to Russia and Ukraine will be eligible to receive up to 1 billion won ($816,000) per company as a government stabilization fund for managing emergencies. Of the 6,021 companies that exported to Russia and Ukraine last year, 1,824 were deemed eligible, according to the government.

For the 316 companies that are 100% dependent on Russia and Ukraine for their exports, the government will appoint officials to offer assistance.

The authorities have announced that they will establish new special financial guarantee guidelines for damaged companies in order to offer more favorable limits and guarantee ratios.

In order to ease the burden of logistics costs, the government has pledged to compensate for the damage incurred by the return and delay costs of exports to Russia and Ukraine under the export voucher support.

The government added that it will offer legal advice and consultation to business groups whose costs have increased due to rising commodity prices.

“The government has decided to impose additional sanctions to peacefully resolve the crisis and curb armed aggression as a responsible member of international society,” the finance ministry said in a statement.

The government on Friday announced plans to implement an emergency financial support package worth 2 trillion won to be implemented in the form of a special loan by state-owned banks. In addition to this, the government has decided to offer special grace periods, such as extending loan maturity dates, for SMEs that are expected to suffer losses due to the Russian-Ukrainian conflict.

Not only SMEs, but also large corporations are on high alert as their operations in Russia and Ukraine are at stake.

Due to the protracted crisis between Russia and Ukraine which has impacted the delivery of components to Korean companies’ manufacturing plants in Russia, Hyundai Motor Group said on Monday it was unsure when to resume operations. at its assembly plant in St. Petersburg, Russia.

Although the Korean automaker said its temporary shutdown was influenced by the shortage of automotive chips that has continued since last year, it seems clear that the Hyundai Motor Group faces a dilemma regarding the operation in Russia. .

While global shipping companies such as MSC and Maersk are also suspending shipping operations to Russia in response to the international effort to shut down the Russian economy, the South Korean automaker has ceased operations in its St. Petersburg plant on March 1.

The Russian market accounts for around 4% of the Hyundai Motor Group’s global production capacity, with some 330,000 vehicles built there. Manufactured vehicles are exported to neighboring European countries.

Last year, Hyundai Motor and its sister company Kia Motors sold a total of 171,811 units and 205,801 units respectively, accounting for a total market share of 22.6% in the local market, number 2 after the manufacturer French automobile group Renault.

The Korean automaker aimed to sell a total of 455,000 units this year, about 5.8% more than last year, but industry insiders said the automaker had halved its volume of production due to a persistent geopolitical problem.

Market experts noted that if the shortage of auto components, including chips, continues, Korean companies may consider closing their factories and exiting the market.

“With the U.S. and EU’s decision to impose SWIFT sanctions on Russia, it will be difficult for the Korean automaker to export as it has done in previous years. Some 450 billion won in losses are expected. for Hyundai Motor Group,” said Yim Eun-young, EV and mobility researcher at Samsung Insurance.

Posco International, the country’s largest trading company under Posco Holdings, also halted operation of its grain terminal in Mykolaiv, Ukraine. This poses a significant risk for the Korean company, which was seeking to expand its grain capacity to 25 million tonnes globally by 2030 to become the world’s top 10 food company. Posco International’s food business accounts for about a quarter of its total sales in addition to steel and energy.

“We relocated resident workers from Ukraine, and all of them returned to Korea. We are still monitoring the situation closely,” an official from Posco International said.

Established in 2019, Posco Internatinoal’s grain terminal has been a major gateway for overseas grain sales such as corn and wheat to Europe, North Africa, the Middle East and Asia.

According to the Korea International Trade Association, more than 300 reports have been filed by local companies on export difficulties to Russia and Ukraine since Feb. 24. More than half of the cases were related to payment issues, as the United States and the EU imposed economic sanctions against Russia. Other difficulties included logistical problems and lack of information.

“As the recent series of incidents have caused a series of damages to the commercial industry exporting to Russia and Ukraine, we will continue to make efforts to minimize the damage through cooperation with the government and related agencies” , said Sin Seong-kwan, executive vice president. president of KITA.