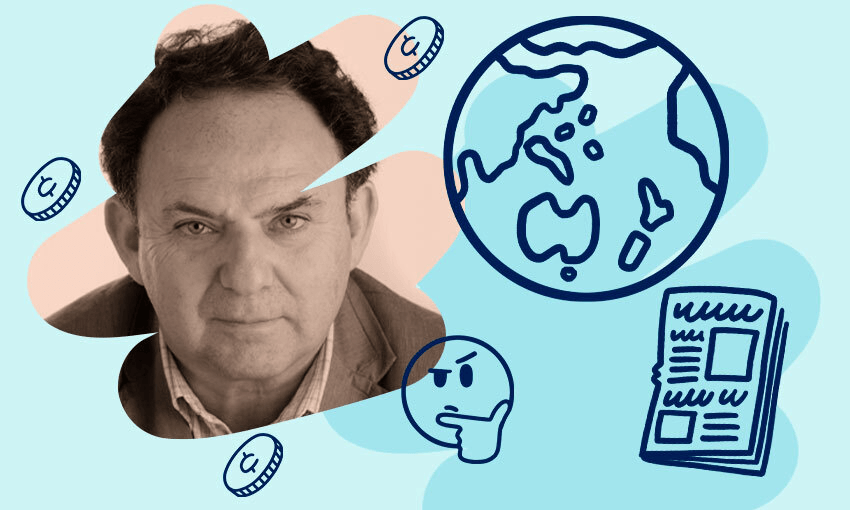 In 2011, Andrew Jaspan launched The Conversation, the news site featuring articles written by academics for a general audience. Four years after his acrimonious departure, he is ready to start all over again. Hal Crawford talk to him.

For a passionate guy who has a reputation for eliciting strong reactions, Andrew Jaspan seems remarkably reasonable when I talk to him.

The 69-year-old has served as a newspaper editor in the UK and Australia, founded a media network and model of global influence – The Conversation – and famous grave with some of the people he worked with. Now he’s ready to start all over again, launching an information startup that has the potential to change the way information is distributed from academia to the rest of the world.

360info is sort of an academic press service, and because Jaspan runs it, people pay attention: he’s used to doing things that work.

The company that really made Jaspan’s reputation is The conversation, and he is still dear to him. The current boss of The Conversation, Lisa Watts, observes that it was one of those ideas that immediately made sense: asking subject matter experts in academia to write topical articles for the general public. , with the help of professional editors and journalists. In 2009, as Jaspan scoured the search for support and funding, he had to sell his idea â€œimmediately saneâ€. Ultimately, he says, he raised â€œbetween 35 and 40 million,â€ launched the site in 2011 in Australia and New Zealand, and then launched The Conversation globally. There are now eight affiliated organizations, including UK, US and Indonesia.

â€œThe reason I was able to collect this money – I raised it all from great universities and philanthropy – is because I had a vision that they loved and buy into. This is usually what happens with philanthropists or foundations: they want to see who is the person running them.

Jaspan’s vision is to provide good and accurate information to as many people as possible. He says it is the common thread of his career.

â€œI have always been interested in the serious end of journalism. So I kind of climbed to work for The Times, The Sunday Times. And then, luckily, I became editor of Scotsman, Scotland On Sunday and The Observer in the UK, then The Melbourne Age. There is a continuum throughout: I’m just interested in serious, quality journalism.

Jaspan struggled for editorial resources amid serious cost cuts as editor-in-chief of The Age from 2004-2008, before falling by the wayside himself.

â€œI started The Age with a workforce of over 300 employees. When I left there were barely 150 left. a new way to deliver high quality information.

Jaspan doesn’t want to talk about the circumstances under which he left The Conversation in 2017. What is known to the public is that the organization’s founder, editor and public face resigned after a period of turmoil and turmoil. decline of some senior executives, including global startups. Jaspan is a diplomat on The Conversation’s current path, but it’s also clear his new venture is a different beast.

â€œThe two areas we stay away from are breaking news and opinion,â€ he says. â€œI have completely parked the news cycle. I’ll leave that to The Conversation. What we do is focus on the biggest problems in the world, we kind of follow the United Nations Sustainable Development Goals.

360info is not a site intended for the public, but rather provides articles and multimedia to publishers, who then distribute the content to their audience. This makes it similar to a news agency (or “press service”) like Reuters or AAP (Australian Associated Press). The big difference is that the content in 360info is free. A publisher creates an account, browses the 360info content management system (CMS), uploads the content, and then publishes to their own platform. The only requirements are to credit the source and to keep the author’s signature.

This approach offers many advantages: advertising is good for academic authors, free content is good for publishers, and authoritative information is good for audiences. So who pays the bills for Jaspan and his team of nine editors? Monash University in Melbourne, whose Vice-Chancellor, Margaret Gardner, â€œcould see the value and wanted to support it. But it is an independent service.

Jaspan says Monash funds the service as a “positioning statement” for a global university, and because Gardner believes universities need to “work a lot harder to demonstrate their public value to society.”

â€œBuilding a brand doesn’t interest me. We are literally just an information provider. We supply goods to people who can then retail them for their own use. By doing this I think we can reach a lot more readers. We have 750 outlets instead of having a single destination outlet if we had launched a website.

Of those 750, several New Zealand publishers will be free to use the content at the full launch early next year. The service uses a CMS developed specifically for wire services and is currently running a closed trial.

When i log in 360info.org for an essay, i find a simple and well presented content feed service with two big special contents: “Living to 100” and “Energy in Transition”. They are holders of topical content, with a bunch of sub-articles that could be posted unaltered in many general interest publications. One of the headings â€œLiving to 100â€ catches my attention: â€œWhy your grandmother doesn’t want to zoomâ€. It was written by Barbara Barbosa Neves, Senior Lecturer in Sociology at Monash University, and has been well presented by Adrian Black, Associate Editor of 360info:

â€œJune, 73, has lived alone for 20 years. She tells everyone that she likes living alone, but she actually hates it.

While the system is currently weighted with content from Monash University, it will take content from academics working anywhere. Authors get approval in the system before anything goes live.

It is liberating that the success of 360info is determined not by the traffic it generates – remember, there is no public site – but by the number of times and by whom the content is reposted. With the news media currently in financial crisis, it is easy to see that 360info’s high quality free content is being widely used.

Part of 360info’s secret sauce will be Jaspan himself, whom Lisa Watts of The Conversation describes as “a persuasive character … a highly motivating force of nature.”

On the other side of the ledger, many content organizations have stranded on the rocks of worthy content. There’s also the risk Jaspan takes by staying away from the latest news: In my experience, the best way to generate traffic is to stay true to the topics of the day.

There is a way to get the audience’s attention, however, without being a follower. I ask the former editor-in-chief if he secretly hopes the site will eventually set the news agenda.

“I would love to think we’re going to do it, but it’s a tall order to think you can do it at the start.”

Guebert: Managing climate risk is good business and good for the future | Agriculture