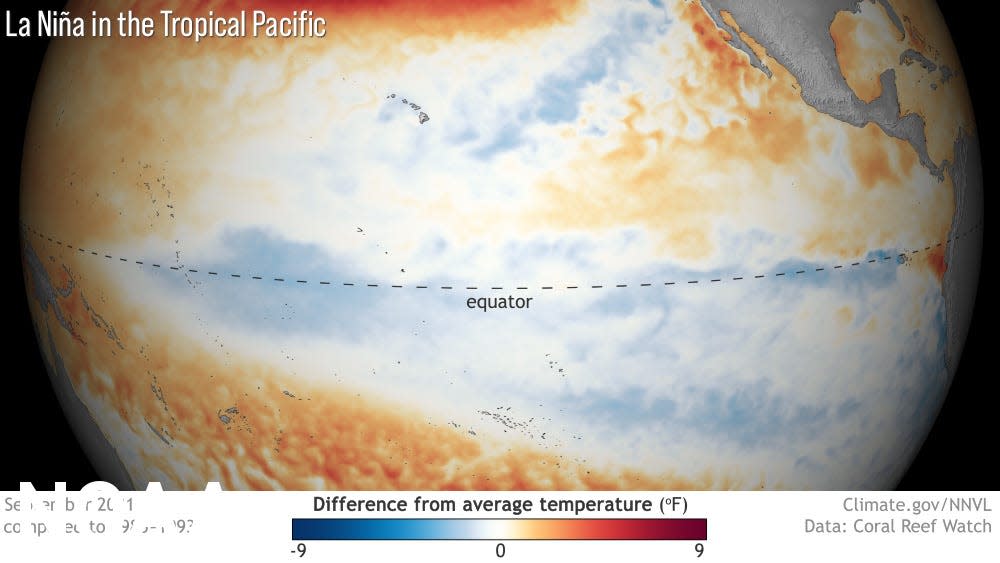 What does this mean for our winter climate?

For the second year in a row, La Niña is officially back, federal forecasters said Thursday.

The La Niña climate model – a natural cycle marked by cooler-than-average ocean waters in the central Pacific Ocean – is one of the primary weather drivers in the United States and around the world, especially in late summer. fall, winter and early spring. .

This is the opposite of the more well-known El Niño pattern, which occurs when ocean temperatures are warmer than average.

“La Niña is expected to affect temperature and precipitation across the United States over the next several months,” forecasters from the National Oceanic and Atmospheric Administration’s Climate Prediction Center said Thursday.

NOAA has said this year’s La Niña (translated from Spanish as “little girl”) is likely to linger through the winter.

“Whatever you want to see having a La Niña, we see it,” Michelle L’Heureux, forecaster at the center, told Bloomberg News. “We’re pretty confident that La Niña is here.”

A typical La Niña winter in the United States brings rain and snow to the northwest and unusually dry conditions to most of the southern part of the United States, according to the forecast center. The southeast and central Atlantic also tend to experience warmer than average temperatures during a La Niña winter.

Additionally, due to La Niña, California may see little relief from its ongoing drought, which will further exacerbate the wildfire season, Bloomberg said.

“Our scientists have been following the potential development of a La Niña since this summer, and this has been a factor in the above-normal hurricane season forecast, which we have seen unfold,” said Mike Halpert, deputy director of the NOAA Climate Prediction Center.

Back-to-back La Niñas are not uncommon and can be described as a “double dip”. In 2020, La Niña developed during the month of August and then dissipated in April 2021 with the return of “ENSO-neutral” conditions.

The entire natural climate cycle of El Niño and La Niña is officially known by climatologists as El Niño – Southern Oscillation (ENSO), a sawtooth dance of warmer seawater and more. cold in the central Pacific Ocean.

During the La Niña events, the trade winds are even stronger than usual, pushing more hot water towards Asia, NOAA said. Off the west coast of the Americas, upwelling increases, bringing cold, nutrient-rich water to the surface.

This article originally appeared on USA TODAY: Winter will feel the impact of La Niña this year

Five car scams that could cost drivers up to £ 5k